This past weekend was the Stampin' Up On Stage events - live in Brussels and via theatres across the world - and something huge happened.

The 2015-2016 Artisan Design Team was announced, and I've been chosen to be a member.  I'm one of four demonstrators in Canada and twenty around the world that will be creatively representing the company!  This is a huge - no, monumental - honour, and I'm still flabbergasted that I was selected for it!

Back in early October, I got a phone call on my cell phone while I was wandering the grocery store.  I was literally standing in the meat department, next to a fridge full of beef, when the voices on the other end told me they were calling from Stampin' Up... and were they talking to "Shannon Lane?  THE Shannon Lane?  Crush-On-Colour Shannon Lane?"

I had been waiting almost five months for any news on the Artisan Design Team.  And I had a feeling that here, in the meat department, it was finally happening.

And I burst into tears.

While still standing in the meat department.

While my four-year-old asked what was wrong and people stared at me.

Everything else from this point was kind of a blur.  I'm pretty sure I just said "oh my god, oh my god" a bunch of times, and I remember someone joking about stopping by the Kleenex aisle next to wipe my face.

The last six weeks have been the hardest of my life.  Secret keeping is NOT my forté, and I literally couldn't tell a SOUL - husband and son exempt, but then I cut my son out of that deal because dude, he's four.  Not an age known for keeping secrets.  So I told my husband a thousand times because I couldn't tell anyone else.  He's so tired of hearing about it and it hasn't even begun!  When I finally told my mom this weekend, she got all excited and congratulated me... and then told me this is probably the longest I'd ever kept a secret.  Seriously:  I called her at 7:00 in the morning on the day I found out I was pregnant.

Wanna hear something SUPER funny, though?  For six weeks, I've been keeping this secret from my best friend, who is not only my best friend but also my Stampin' Up upline AND a current Artisan - and on Saturday, when we were finally allowed to spill the beans - it turns out SHE'S been keeping the same secret from ME!  We're both on the team!  Ahhhhh!!!

This past Thursday, everything became real when the FedEx truck arrived.  I assumed it was my Paper Pumpkin subscription arriving a day early, but the box looked weird... and when I opened it, this was inside. 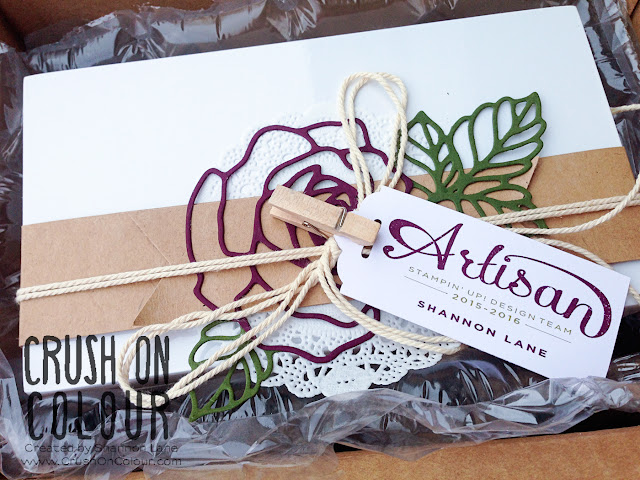 Oh LAWSY, look at that beauty!

And inside of that was this... 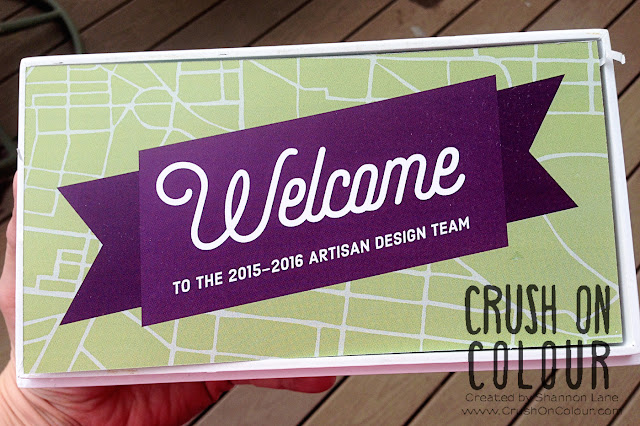 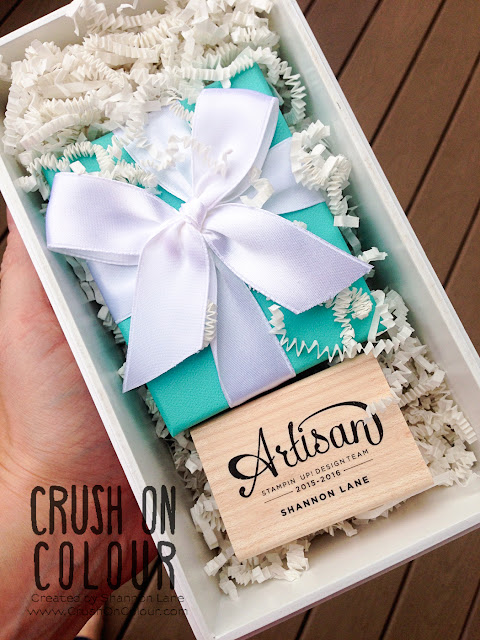 A custom, personalized stamp and my first (only!) piece of Tiffany jewelry; a charm bracelet engraved with the Artisan logo and years.

I am so overwhelmed with gratitude and joy and excitement about having been given this opportunity; I can't wait to spend the next year doing what I love (and loving what I do!)