It's time for TGIF Challenges Throw-Down - August Edition!  The concept is easy; choose at least four items from the mystery box, add your staples from the pantry, and create a paper masterpiece!  The catch, though, is that you can't use anything else - nada, squad, nothing, bupkiss.  That's where it gets really tricky! 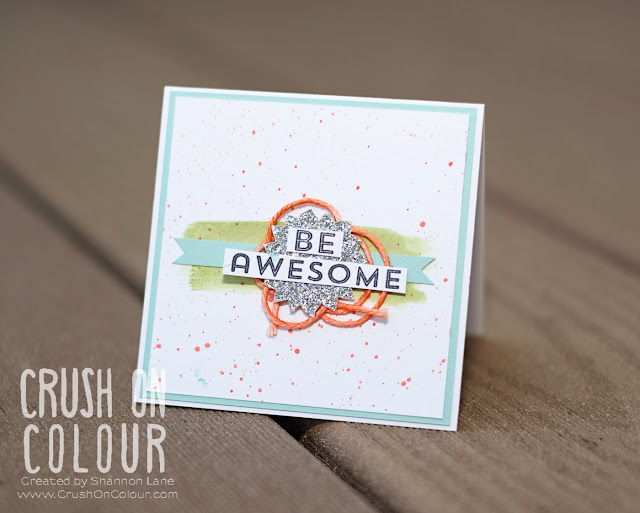 This project went through several revisions.  I had a brilliant idea that looked so pretty in my head and terrible on paper.  Then I decided to make a little box!  Oh, no, can't use one of my punch boards.  I know - I'll do a card-in-a-box!  That's just cardstock and score lines!  Nope, can't use window sheets.  Aaaaaand this process continued.  For two days.

No joke - my husband came to join me on the first night (which has literally never happened before) and he made three cards while I was still shifting supplies around on my desk.  So THAT was embarrassing.  (More on that later... he used the poop emoji as his jumping-off point and wants to be a guest star for a Triple-Up Thursday post.  I wish I was kidding!)

I got there eventually, though, and in a rather untraditional and very-me sort of way.  I used Flower Patch for a fun and custom sentiment, and used one of the stamps to create the starburst effect from the glimmer paper (simply stamp it on the back side and cut it out!) A bit of splatter and a swipe of watercolour got my ink colours in, and we were rockin' and rollin'.

Wanna join me for the August Throwdown?  Here's the specs this month! 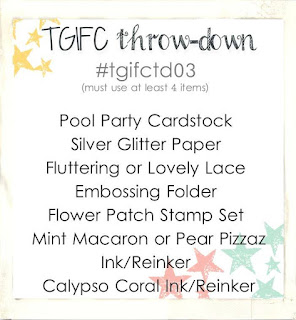 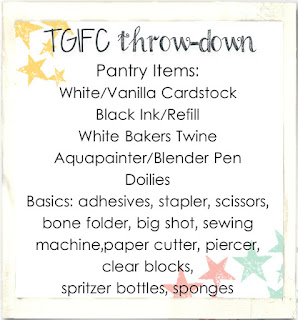 Now it's your turn!  Grab your mystery box items, set out your pantry, and get crafting - I can't wait to see what you come up with!

Aqua Painters
Table by StampinBuddy. Try it FREE.
at August 18, 2015